"The Backs of Life" is our stupid new project for the stupid new year! The plan is to examine each "backdoor pilot" episode of The Facts of Life in excruciating detail. (You know backdoor pilots. It's when an episode of an existing TV show is used to introduce a potential new spin-off show. This happened on The Facts of Life... a lot.) But we're starting with a 1979 episode of Diff'rent Strokes (season 1, episode 24, "The Girls School"), because The Facts of Life itself started there as a backdoor pilot. Thrill to Mrs. Garrett making the move from housekeeper (for a rich dude) to housemother (for a bunch of crazy girls). We meet some future Facts of Life regulars (Blair with a cigarette! Tootie on rollerskates! MOLLY RINGWALD!), some girls we'd never see again (Jennifer? Laura?), and a headmaster played by the cranky guy from The Bob Newhart Show. We also get generic disco music, a frog named Leon, Dana Plato as a ballerina (sort of), Gary Coleman in a donkey costume, and another mysterious Fake Brady Girl connection. Also: More TV talk with ESO Board Silly, more Rock and Roll Hall of Fame talk with Pop Culture Cosmos, Happy 100th Episode to The 42cast, and Happy Birthday to a Cobra Kai sensei.

Don't let this ad fool you. Kreese is still a dangerous a-hole on Cobra Kai.

Pop Culture Cosmos continues their tradition of letting Kevin and Mike Faber sound off about the Rock & Roll Hall of Fame.

Note the school's original name, the wacky headmaster, and a Blair that hadn't quite gelled in the backdoor pilot that started it all. 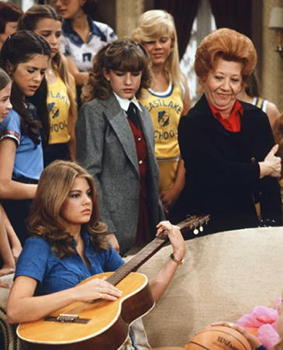 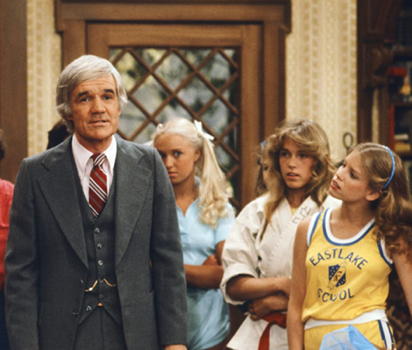