It's Halloween in Chickentown once again, and we're celebrating with a "monster cereals" taste test! That's right, we're sampling Count Chocula, Franken Berry, and Boo Berry, as well as (available for the first time in decades!) Fruit Brute and Yummy Mummy. Is this stuff delicious, or disgusting, or (ideally) both? Let's find out together. Along the way we'll enjoy some classic monster cereal commercials, and (with a little help from Siri) make a startling discovery about Boo Berry. Hey, if you've always secretly dreamed of just listening to people eat cereal... well, this is the show for you. (Also, you have a problem.)

Before we launch into the goofy monsters, let's inject some genuine dread into the proceedings with Plan Your Epitaph Day, observed on either November 1 or 2. Here are some humorous suggestions.

Due to our love of Rankin-Bass, one of our favorite films to watch around this time of year is the forgotten classic Mad Monster Party. 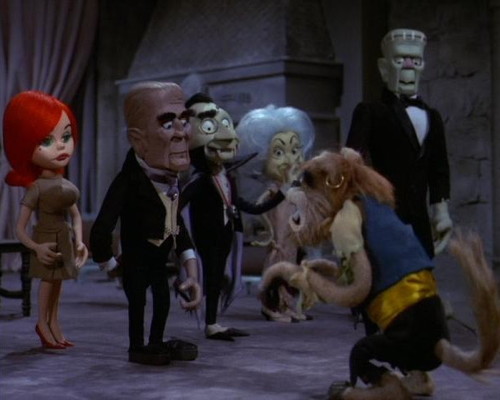 Here are all the General Mills monster cereals, together for the first time ever!

And here are the retro boxes, available only at Target.

Count Chocula and Franken Berry debuted together in 1971.

Despite being on the shelves for 10 years, starting in 1974, Fruit Brute completely escaped Felicity's notice.

If you just can't get enough monster cereal commercials, someone with far too much time on his hands stitched together a 28-minute compilation.

For even more Halloween fun, Kornflake recommends the Man Man video Head On and the song Getting HallowEven by Scooter Picnic (friends of the Flopcast Insane Ian and TV's Kyle).